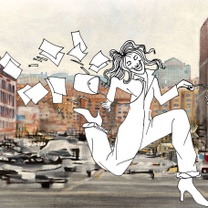 Let's capture the essence of your event with meaningful visuals!

develop her own style of "mind mapping"-visually transcribing discussions. Discussions can

Metaphors are highlighted as well as the evolution of collective thoughts. A process that

enables the client to see the creative process from all interactions and have a visual trace/map of the work achieved.

Provided Graphic facilitation for an event where dignitaries from the Middle East met with American counterparts such as Abdullah II of Jordania, Bill Clinton and Margaret Albright.

Provided for the preparation work for play in Vienna, Austria/ Mauthausen as well as

team on their road trip from Paris to Vienna and death camp Mauthausen for the theatre performance-“Brouette”by Franz Innerhoffer. During the process art work was created during rehearsals enabling the team to see their evolution

15 Large paintings provided as room dressing at the NY office of the World Economic forum in preparation to the gathering of the Schwab awardees. Capture for two days of the interactions in plenary space as well as in sub-groups. Artwork created as giveaways for participants and staff members.

Scribing for two days during an event dedicated to the planning of next decade of 15 women on a professional and personal level.